Dear friends. Let it be said now — I am done with Superheroes and all comic book-inspired pop culture offerings. Behold, a recent scene from the Kessler household:

It is no secret among my general acquaintance that I have become quite weary of Superheroes and their exploits. Despite my unconditional love of all things Joss Whedon, I couldn’t even bring myself to get excited about the new Avengers: Age of Ultron movie that opened this weekend. I happily stayed home watching the baby while Leeman took in this latest geeky offering with some of our friends.

I have nothing against Superheroes, per se. At their best, they can be wonderful explorations of what happens when ordinary people are given extraordinary abilities–as is the case with Peter Parker’s Spiderman. Or they can explore the darker elements of vigilante justice, as happens in most versions of Batman. Even Joss Whedon’s fantastic take on the Avengers becomes yet another avenue for him to play out the challenging and delightful dynamics of pseudo-family groups.

But at the end of the day, my point still stands that superheroes have kind of become far too much like the over-used crime procedurals of geek entertainment. There are bad guys in the world. They do bad things. We have a select group of heroes who can “fix” bad guy problems, usually by means of excessive force. It’s easy to see why such stories have been so completely embraced by audiences over the past 5-10 years. We live in a complicated world that is besieged by any number of evil forces: systemic racism and sexism, religious fundamentalism, global climate change. There’s something just plain refreshing about seeing the good guys (most of whom start out as just ordinary people) take down the bad guys, even if they do it while battling their own internal demons. Perhaps especially if they do it while battling their own internal demons. There is, in other words, an inevitable simplicity to these stories, much as with mainstream crime procedurals. Problem (bad guys) meets Solution (good guys) and then we all get to hang out and eat shwarma.

There’s nothing wrong with this. As I have said, these films and TV shows are incredibly entertaining and often ask perceptive psychological questions of their protagonists. But there is something called to much of a good thing. I’m calling it now — I’m done with superheroes. As good as the Netflix series Daredevil promises to be, I just can’t bring myself to get excited about it. I hear all the projections coming from the Marvel cinematic universe for the next several years. And I just find myself saying … meh. 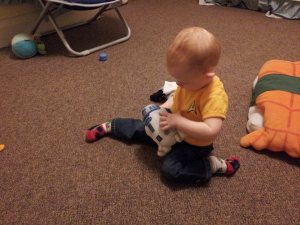 Earlier this week, we (by which I mean the geeky community of the interwebs) celebrated “May the Fourth Be With You” day — celebrating all the fun of Star Wars fandom. Indeed, Star Wars has been making its way back into the collective mainstream consciousness in recent weeks as a second trailer for Star Wars VII: The Force Awakens was released, with full John Williams musical fanfare. All this Star Wars buzz has gotten me pondering how much I always have and always will be a Star Wars fan through and through. It was my first geeky love. I once won a game of Star Wars trivia pursuit all in one turn.Sure, I guess one could argue that something like Star Wars is the ultimate archetypal story for “good guys beat the bad guys.” But in the process, the saga presents evocative images, like the mysterious Force (let us not speak of midichlorians), galactic politics, and the redemption of Annakin Skywalker.

More importantly, Star Wars was also a foundation for my love of Space Opera in general, which is without doubt my favourite fictional genre. I relish stories of diverse, dynamic characters exploring exotic, otherworldly locations, often posing difficult questions about what it means to be human and pushing the limits of the imagination. I long for a return not just of Star Wars, but of TV shows like Star Trek and Battlestar Galactica, and, yes, my one true love Farscape. I crave a geek culture that once again strives after other worlds, wonder, creativity. Stories that occasionally leave questions open-ended. That allow us to ask probing questions, rather than always resolving the looming threat in an epic CGI-laden battle.

There is a spiritual component to these thoughts as well. This blog, after all, would not exist if I did not see a connection between my geeky interests and my spirituality. Our faith does push us beyond easy answers and solvable problems. Our faith should compel us to wonder at the beauty and complexity of God’s creation. Our faith should inspire us to look beyond human possibilities and challenge us to wrestle with mystery. Comic book movies and TV series, fun and provocative as they may be, just don’t fulfill that creative need in me.

So, pardon me as I pass on Age of Ultron (at least for the moment) and just continue rewatching old episodes of Farscape until that long-rumoured Captain Worf Star Trek series actually happens.

3 thoughts on “Take me to a galaxy far, far away!”